Weather:  Overcast and warm to start with sunshine by mid-afternoon
Distance: 7.5 miles

A return to the marvellous Dales High Way which I completed with Mrs C in 2011.  I shall be walking the whole route with guest appearances from the aforementioned Mrs C and, on her debut long distance walk, Mrs R and her lovely Labrador, Holly.  I will also be using some of the alternative routes which have either evolved since the walk was formulated or are bad weather options from the official guide book.

Day One dawned and Mrs R and I were off on our adventures. After a leisurely breakfast we walked to Guiseley Station to catch the Saltaire train. They have an excellent train service in this part of the world - clean, with air-conditioning and a frequent, prompt service.  We were on the trail by half past ten but not before Mrs R directed a lost young man to the local FE college.  We were too early to enjoy a cup of tea from the narrow boat on the Leeds-Liverpool canal so we walked on and passed the cricket and football grounds and bowling greens - they are a sporty lot in Saltaire. 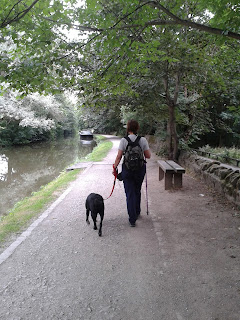 We left the canal at the first lock as a narrow boat full of tea drinking gentlemen motored by. We were then assailed by a budding entrepreneur on the lock side.  He asked if we would like to buy any of his wares.  We looked more closely and sure enough he had items laid out on the lock wall - second hand books, stickers and tissues.  Mrs R asked if he was fund raising for a charity and he answered that he wanted to run a business when he was older and you have got to start somewhere.  Good luck to him - Mrs R bought some stickers.

A steady climb up through Shipley Glen then onto Baildon Moor and the views began to open up back over Saltaire and beyond.  We met a lady heading in the opposite direction and asked if she was doing the DHW. She wasn't but her husband was and she was his support team, dropping him off each day and meeting him at the next night's accommodation: a fine arrangement.  We passed Weechor Reservoir after deciding not to take the safer option through the fields as there were cows around the stiles.  We safely negotiated the short, hectic road section and entered the delights of Bingley Moor.

Lunch was eaten  and then Burley Moor was followed by Ilkley Moor and we were surrounded by glorious, full blooming heather which, combined with  dry paths and a following wind, made perfect walking conditions.  The flag was flying at White Wells cafe and we enjoyed a drink whilst looking down on the bright lights of Ilkley.  A short walk into town to catch our train where the tired dog, Holly, lay quietly on the floor of the carriage.  An older gentleman boarded with his bicycle and we chatted as the train rattled along.  Eric Walker is 89 and was returning home after a 10 mile cycle ride.  He writes walking guides for the Santiago de Compostela long distance route,  a keen walker and a member of Otley Cycle Club.  The website tells you more about his guides and his particular interest in the routes followed by English pilgrims.  An interesting chap who illustrates that you never know who you are going to meet on a train and, more importantly, age is no barrier to getting out there and doing stuff one way or another. 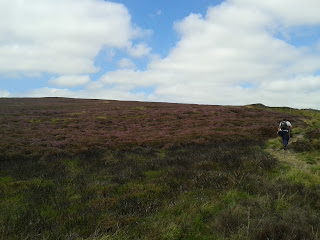 Posted by Wandering Wayfarer at 11:14 am